Yndi Da Silva is a Franco-Brazilian composer, performer and producer.Under the pseudonym Dream Koala, she gained international recognition thanks to the ethereal pop that she composed in her EPs: Odyssey (2013), Earth. Home. Destroyed (2014) and Exodus (2015) accumulating millions of listenings on digital platforms. In 2017, she retired from the scene to start writing what would become her first album: Noir Brazil. By oscillating from Portuguese to French, by provoking the meeting of synthesizers and the skin of the drums, Yndi imagines a contemporary song on his thirteen titles where oneirism, fury and saudade follow one another, far from clichés. His album, Noir Brazil, will be released on May 28. 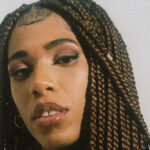