“Imagine a high speed train that’s fueled by jazz rhythm. The red neons of the neighbourhood cafés in Picheleira (a small hood in Lisboa), with auto repair shop view and small garages where oil-checks are made for one more trip. Zig zagging between contemporary movements – from London jazz to Japanese fusion, Afonso Serro, Alexandre Moniz and André Santos create an urban perspective, a characteristic style, a melodious dance with such groove and flow, full of dangerous harmonies. Inbetween sound landscapes that allow levitation and electronic influences, which promise to make anyone tap one’s foot.” ” YAKUZA is the name that houses a number of stylistic references, but also the one that brings together four musicians in a multiplayer arcade. The freshness of AILERON, in which London jazz, Japanese fusion, the dance floor and electronics come together in such a way that this first work asserts itself inadvertently uncategorable and unmistakable at the same time. ” 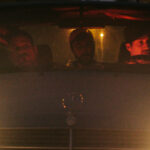