Since 2014, and howling from Porto, the band known as Sunflowers has been shaking up the Portuguese music scene and like the plague in the 1300’s, they’ve been spreading all over Europe. Maybe it’s because the aggressive, destructive sound produced by the band has nothing to do with their flourish name. Maybe it’s because of their prolific work ethic. Maybe?
In 200+ shows over the old continent, they’ve shared stage with bands like Oh Sees, Moon Duo, Black Lips, Boogarins, La Femme, … and played festivals as Festival Indigènes (FR), Endless Daze Fest (SA), Inner City Psych Fest (SA), Bristol Psych Fest (UK), Festival Europavox (FR), among many others.
Their debut album “The Intergalactic Guide to Find the Red Cowboy” was first released in 2016 by Portuguese indie label O Cão da Garagem and re-released in 2017 by French label Only Lovers Records. Also in 2017, the band embarked on 2 European tours, in May and November/December, swinging by Spain, France, Italy, Germany, Netherlands and more, surprising every one that crossed paths with them with the insanity and intensity of their live performances.
In February 2018, the band released their sophomore album, “Castle Spell”, released on a double LP by Stolen Body Records (UK) and Only Lovers Records (FR) and cassete tape by O Cão da Garagem (PT). During the first semester of the year, they focused on touring in Portugal, starting their 40+ shows over the country in a tour aptly called “Sunflowers and the taking of the castle until the summer”. In September they embarked on their most extensive tour to this date, booked by Basement Bookings, over 2 months of mayhem and fast food, swinging by 17 different countries, from Sweden to the Balcans.
In the course of 2018, the band has grown. In number and spirit. To better define the intensity of their sound, they decided to add a bass player on live shows. They are now conspiring the next sonic destruction – studying the north, south, east and west of the globe and fighting off greedy and sketchy promoters and decadent drunk live shows atendees. In their spirit of ignoring-everything-that-has-been-said-to-keep-them-safe, the band proves restless on their live performances, delivering a performance that goes through a meth fueled block party to a sonic stabbing session. And they ask the audience to share their energy, to spread it further than a PA system with a sliced speaker can. To let their energy do what it’s meant to: break the symbolic chains that locks our hands, distracting us with screens, ads and cute dog videos. There will always be someone to manipulate, censor and control the airwaves, for it shall be saved of the imminent sonic stack of the band. But no one can turn down their growls and especially their amplifiers. This is a band that sacrificed their hearing for us to be able to study the Larsen effect up close. Now it’s time to sacrifice yours. 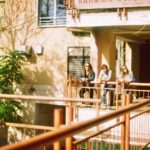 Sunflowers (PT)
Since 2014, and howling from Porto, the band known as Sunflowers has been shaking up...