Born in Gondomar at the end of the last millennium, João Não brings in his words the fusion between the local and the global, searching for ideas wherever he goes and wherever he wants to go. After several years engaged in writing, music naturally emerged in his path, calling for his voice to interpret and turn into songs the verses he has been building since he was young. The first project was born there, in the heart of this “Terra-Mãe” that saw him grow up and Lil Noon, his partner in production and presentation. Ignoring some musical barriers and with eyes (and ears) set on the fusion of genres, the two artists from Gondomar compiled several songs that aim to present them to the national scene, in search of a ‘place in the sun’. Where the juvenile and the urban know the gentle, even the insane, and the thread that leads is the voice. In the motherland, running is free to keep alive the son that shines in us. 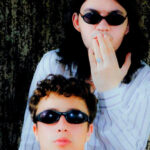 João Não & Lil Noon (PT)
Born in Gondomar at the end of the last millennium, João Não brings in his...