Eugenia Post Meridiem takes shape in summer 2017 when Eugenia (voice, guitar) meets Matteo (bass), Giovanni (guitar, keys) and Matteo (drums, percussions). After three months of travels, experiences and intense tracks’ processing in Lisbon, Eugenia meets Matteo, bassist and electronic musician, Giovanni, a psychedelic oriented guitarist and Matteo, a jazz oriented drummer. The meeting lead to the creation of a series of songs that as well as showing a wonderful voice and remarkable songwriting potentials,reveal across the arrangements, soul,indie, folk influences and a pronounced inclination to 60s and 70s psychedelic contaminations finely combined with the roughest 90’s sound textures and the meeting point of 4 different musical backgrounds. In August 2018 at the Big Snuff Studio of Berlin the band recorded its first work: In Her Bones, that was released on October 11, 2019. In summer and autumn 2019 they’ve been touring around Italy. The band has been also selected to play at ESNS and MENT Ljubljana in January and February 2020, at WAVES Festival (Vienna) in September 2020 and was chosen as well for the INES #talent pool 2020. Rolling Stone Italia has counted Eugenia Post Meridiem among the twenty italian music promises for 2020. The band has been recording this year two new songs (LIFE SLEEPER SIDE A and SIDE B, produced by Matteo Pavesi) at Fonoprint Studio in Bologna, due to release between summer and fall 2021 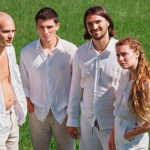