Davi Sabbag is a Brazilian multi-artist based in São Paulo, singer, songwriter, instrumentalist, performer, dj, producer, arranger and musical director, with 13 years of musical career and more than 40 tracks released only in the last 3 years of solo career. Davi believes in the individual power of creation of each artist to manifest original works, channeling feelings and sensations through art.

From piano lessons as a child, gigs as a teenager, academic training in music composition, and his experiences as a young independent LGBTQIA+ artist based in Goiânia, one of the most important hubs of independent music in Brazil in the last 20 years, came the textures and references that permeate the heritage of artistic, musical, cultural, and aesthetic influence that is reflected so maturely in his current work.

The sonic sense in which his compositions are directed is rooted in electronic music with strong references to R&B, Drum & Bass and Pop music, fed by the aesthetics of the 2000s and its percussive rhythms, and beyond, cm a young, chic, sexy, intimate, awake and electric energy. 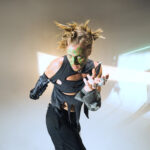