CACIQUE’97 is a Luso/Mozambican afrobeat collective that crosses the typical afrobeat rhythm of Nigeria, with the musical tradition of the Portuguese-speaking countries of Africa and Brazil.

It is this mixture that makes Cacique’97’s afrobeat so captivating.

Together since 2005, they conquered the public with their warm, vibrant and interventive sound and an infectious stage energy. They played in several Portuguese Music Festivals, among which the Festival de Músicas do Mundo de Sines, the Festival Med, the Festival Delta Tejo and the Festa do Avante stand out. They also performed at the prestigious Warsaw Cross Culture Festival in Poland and at ImaginaFunk in Spain.

2009 marks the debut with the homonymous album edited by Footmovin Records, it was the first afrobeat album made in Portugal and gathered excellent reviews in the national and international press. Seven years later they released their second album – We Used To Be Africans, by Rastilho Records, a record immediately referred to by several personalities in the music world as one of the best albums of the year.

This year the band celebrates ten years of its debut album, to mark the date a vinyl edition will be published by the end of 2019. 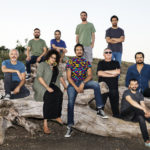